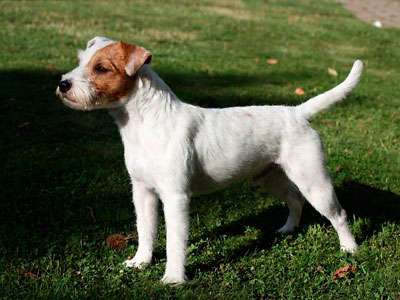 Parson Russell Terriers traditionally have a leg span roughly equivalent to the length of their body. The coat is generally predominantly white, with trademark black or tan markings, particularly on the head. Although the coat is easy to groom, it is not unusual to see a "broken coat", whereby there is a combination of smooth and longer hair. The breed also sports ears that drop down into a "V"-shaped point (pointing down slightly and toward the eyes), with a black nose. The Parson Russell Terrier's body length is roughly equivalent to the height of the dog.

The Parson is well-known for its hyperactive and energetic personality, requiring a great deal of attention and exercise every day. This can be a great benefit when entering them into dog sport shows, particularly agility. Depriving the Parson of its required exercise can result in the dog being bored, which can lead to destructive behaviour within the home.

As one of the early Fox Terriers, the Parson is unsurprisingly adapted for work, whilst remaining an affectionate and playful dog. Retaining some of their early instincts, the breed will commonly chase small mammals and "go to ground", remaining in position for up to days on end. It's important to keep a watchful eye on the breed when off the lead, as they can easily disappear into undergrowth and be difficult to find if they adopt such a position. However, they are more frequently seen in dog shows and rarely in a work setting.

Although the Parson is known for being tolerant of children, they do not take well to rough handling, and supervision is advisable when leaving the dog with young children. In terms of other dogs, the Parson can be very brave and is known to have a god complex, fearlessly taking on dogs much bigger than them. This breed also has a pack mentality and they need to see their owner as the leader of that pack, otherwise obedience can easily become an issue.

Like many other dogs, the Parson Russell Terrier has common health conditions associated with the breed, predominantly eye conditions. These can include lens luxation a condition that can lead to dislocation of the eye's lens, and ultimately, blindness. Fortunately, it is possible to screen Parsons for this condition, as it is inherited. The breed can also be affected by cateracts and other eye conditions, as well as some other breed-specific conditions, such as deafness.

The Parson Russell Terrier has an average lifespan of around 14 to 15 years, which makes it an ideal family dog to bring up with children. This is above-average when compared to other breeds of dog.

The Parson is extremely intelligent and as such, responds very quickly to obedience training. They are quick to learn tricks and can essentially learn pretty much anything very quickly. Despite this, it can often be difficult to encourage the breed to perform a learned behaviour without a reward, so training and persistence is key. It is this intelligence that lends the breed well to being a show dog.