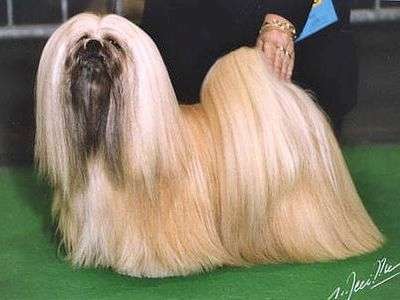 The Lhasa Apso is one of the oldest dog races worldwide. It is also called the "Liondog" or "Lhasa Terrier".
It is a very popular dog, but not just because of its size. Allergy sufferer will not have any problems with their hair, because they are not loosing its fur. Also this race is well-liked as a therapy dog, especially for children with autism or anxiety states.
According to the FCI it is a companion and toy dog, section 5, Tibetan races. It is closely related to the Shih Tzu and because of its look, it is a very popular dog for showings.

The Lhasa Apso got breeded by the Vajrayanas in the monasteries of Tibet. It had the message of the "ambassador for peace and luck. They were holy dogs, because they protected the treasures of Buddha. Because of their look and their long hair, they were also called the "Liondogs". But their real name, Lhasa Apso, was a assembly of the Tibetan capital "Lhasa" and the word "Apso", which means long-haired, shaggy mointain goat.
In 1901 the first Lhasa Apsos came to Great Britain. In 1934 a breed standard got introduced. But in other European states, this dog race came very late. For example in Germany. The first Lhasa Apsos came around 1970.

The Lhasa Apso is about 25 cm tall and weigh about 5 to 7 kg.
Because of its look, it is also called the "Luxury dog".
It has dropping ears, its tail is appointed high and lays over its back. Its back is straight and the paws are round. Its muzzle is about 4 cm long and not quadratic.
Their eyes are oval, dark and mid-sized.
But the most specific detail on this dog, is its hair. Its top hair is long, straight, hard and heavy.
There are many colours allowed. For example white, grey, black, red, gold, sand, dark-grizzle or two colours.
The Lhasa Apso also can have short hair. This is a very seldom alternation. These dog races are called the Prapsos.

The Lhasa Apso is a very good companion dog. It loves long walkaways and because of its strong muscles, it is the perfect dog for peregrinations and mountain tours. It is a very tough, sustained and small dog.
This dog race is very intelligent and obedient. Lhasa Apsos are very affectionated, sensitive, tolerant and empathetic. Because of this fact, they are popular therapy dogs for children or even for retirement homes.
They love children and other animals. Because of their soft character, they do no have problems with others.
Lhasa Apsos are very friendly and lively dogs, which love to play.
But they can also be idiosyncratic sometimes. This is because of their pride and self confidence.
But all in one they are very charming and graceful.
This race is very viligant, but not aggressive.

Because of its long hair and charming look, the Lhasa Apso is a popular dog for showings.
The owner of its dog has to care its long hair daily. It has to shine and there are no tangles allowed.
The eyes have to be clear also and without tear fluid under the eyes.