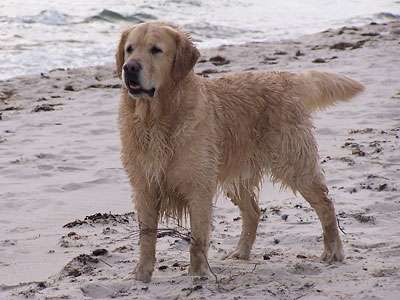 The Golden Retriever was bred in Scotland, during the 1800s. They were originally bred for retrieving game and waterfowl, during hunting and shooting events. These large-sized, gun dogs were first bred by Lord Tweedmouth, who sought to breed a dog that would be able to safely retrieve shot prey, without damaging it, and would be well suited to the Scottish climate and terrain.

The Golden Retriever is large sized dog breed, which features a gold or cream coat. The breed’s coat is very dense and wavy, which allows it to repel water. The average male weighs between 65 to 75 pounds, and measures 58 to 61 centimetres in height. The average female golden retriever weighs 60 to 70 pounds, and measures 55 to 57 centimetres. A Golden Retriever will generally grow to full size when it’s one year old. On average, this breed lives between ten to twelve years.

Happy, calm and eager-to-please, the Golden Retriever has a very pleasant temperament. They are calm, yet confident, and they like to make friends. This breed is very patient with children. They like to work closely with their owners, and are generally very loyal.

While Golden Retrievers are friendly and loyal, they are not a one-man type of breed. This means that they are friendly with everyone, even strangers, so they don’t make the best guard dogs. Due to their role of retrieving waterfowl and game that they were originally bred for, Golden Retrievers love the water. As with all dog breeds, golden retrievers require plenty of exercise, socialisation and mental stimulation to be happy and well-rounded.

Now, Golden Retrievers are not primarily used for their prey-retrieving abilities. Nowadays, they are used as sniffer dogs, therapy dogs, guide dogs, hearing dogs, and search and rescue volunteers.

As Golden Retrievers are an intelligent dog breed and like to please their owners, training them is relatively easy, when compared with other dog breeds. They perform exceedingly well in obedience tests and agility tests. The Golden Retriever is a happy and confident dog breed, which responds best to positive training methods.

Happy, calm, friendly and confident, Golden Retrievers are awonderful dog breed. As with any other dog breed, Golden Retrievers need plenty of exercise and mental stimulation, but just as importantly, they need lots of love, attention and positive reinforcement from their owners.