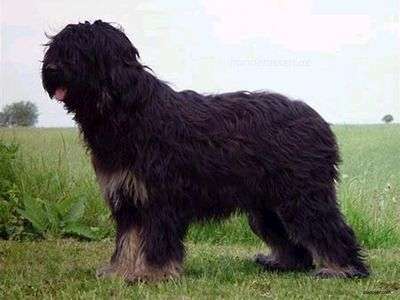 This hardy breed is always eager to please and is very obedient and loyal when trained well. It excels in agility and is known for its stamina.

The Cão da Serra de Aires features a long coat that is either completely smooth or has a slight wave. There is no undercoat and the coat colours are typically yellow-red chestnut, fawn, black or gray. White patches may be present on the chest, although not on the rest of the coat. The breed has long forelimbs and round, dark eyes that give it a gentle expression. The ears of the Cão da Serra de Aires are moderate in size and hang all the way down to the sides of the cheeks. The legs are particularly long, while the chest is deep. The head is wide and sturdy complete with a prominent nose an d strong teeth and jaws. The Cão da Serra de Aires also features a pointed tail that reaches to its hocks.

This breed is extremely hardy and does not suffer from the health problems that plague many similar breeds.

This breed is fairly calm indoors as long as it gets plenty of exercise and care. However, it prefers to live outside and should be given plenty of space to run around during the day. Although the breed can live inside for short periods of time, it is not suitable for apartment life and tends to become listless if kept inside for too long.

The feet of the Cão da Serra de Aires are adaptable to rough terrain and the breed loves long walks in the countryside. The Cão da Serra de Aires has a lot of stamina and takes to agility training well. The coat of this breed should be checked regularly for tangles and excess hair growing between the pads on the feet should be trimmed regularly. Do not brush or shampoo the hair too often, or it will lose its appealing rough look and lustre.