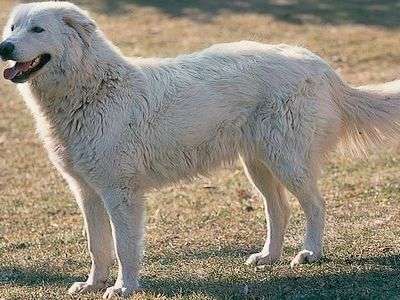 The "Cane da pastore Maremmano-Abruzzese" is an Italian breed of sheepdog, which is usually just referred to as the Maremmano Sheepdog. This dog that is used to guard livestock, is indigenous to central Italy, and, in particular, the Abruzzi, Lazio, and Tuscany regions.
For many hundreds of years, Italian shepherds have used this animal to guard sheep against attack from wolves and other predators. Translated into English from Italian, the title the Maremma is "The dog of the shepherds of Maremma and Abruzzese region."

The Maremma Sheepdog has a very muscular and robust built with a white coat that is extremely thick to deal with cold Italian winters. It has a black nose a large head, and males can weigh up to 45 kilograms, and stand between 65-73 centimetres at the shoulder. Female dogs can weigh as much as 40 kilograms and stand between 60-68 centimetres. Although this is the average height and weight, it is possible to see dogs of this breed that are considerably bigger.
The breed is sometimes divided by experts into a variety of subtypes that are based not only on minute physical differences, but also as a result of the villages and province names where the dogs are found. For example the Maremmano, the Marsicano, the Abruzzes, the Peligno and the Pescocostanzo. Biologists, however, argue that that divisions such as these are not valid, as the breed as a whole was bred over centuries for behavioral characteristics as guardians of a flock.

Even though these dogs are large, the Maremma Sheepdog can still be excellent companion dogs, as long as the owner has adequate space. The Maremma is very gently but also protective and can quickly bond with a family as a pet, and displays an intelligent and calm disposition.
These dogs could display a hostile disposition to family outsiders, and because of this may not be well suited to living in built up urban areas. Another problem with living close to other people is that they tend to bark as part of their duties as guard dogs. This could create disturbance problems. They are well suited to an owner that has a lot of land, or a "ranch" style environment.

Dogs with a description similar to the Maremma that were used as defense animals, date back to the days of Ancient Rome. They are depicted not only in pictures, but also sculptures from the period.

The first registration of a Maremmano in the Italian Kennel Club was in 1898. Up until the year 1958 the Maremma and the Abruzzese were thought of as two different breeds, each with their own breeding society. Early in 1958 the two breed were unified by the "Ente Nazionale della Cinofilia Italiano." The explanation that was documented is "natural fusion", as a result of movements of dogs, as they followed flock from one region to another.
Maremmano dogs are still used by many Italian sheep farmers in the Apennines in central Italy. As well as Italy, these sheepdogs can be found working in the US, Canada and Australia.

Recently in Australia, in the Warrnambool region, the first trial took place using Maremma Sheepdogs to guard the Penguin population that had been dwindling. This unique project received an award from the Australian government in 2010.
This breed of sheepdog among others is widely appreciated in modern times by environmentalists. The Maremma makes it possible for livestock to coexist with the predator population, by the protection of their flocks.