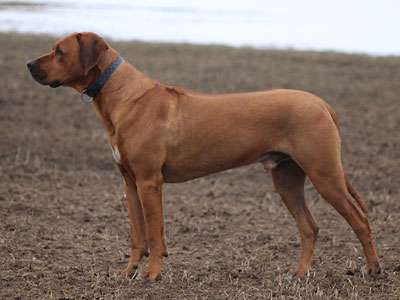 The Rhodesian Ridgeback comes from Zimbabwe and was originally used as a hunting dog and a retriever, while the breed was also used to guard property and take care of children. The breed is descended from a selection of ridgeback dogs that the Boer settlers imported to Zimbabwe in the 16th and 17th centuries. These dogs were kept by native South African tribes, while the standard Rhodesian Ridgeback dates back to 1922. It was soon discovered by big game hunters that they could use Rhodesian Ridgebacks to hunt lions, which gave the breed the nickname the African Lion Hound. The breed was imported in 1950 to the USA and was recognised by the American Kennel Club in 1955.

This large, muscular hound features a broad head that is flat between the ears. The breed has a long and deep muzzle with a defined stop. The tongue is sometimes black, while the nose can be black or brown. The eyes are usually brown and round, while the ears are medium-sized and drop down from their high setting on the head. The legs are strong and straight, while the long tail is thick at the base and tapers to a point. The Rhodesian Ridgeback has a short and dense coat a clearly defined ridge of hairs down the centre of the back. A range of coat colours are possible, from light brown to red, with white patches on the toes and chest.

Although the Rhodesian Ridgeback is ferocious when used for hunting, it is a calm, obedient and gentle dog in the home. This breed is extremely good natured and relates well to older children, although it can be a little too boisterous and play too roughly for small children. This breed is very intelligent and is loyal to the family, although they can be reserved around strangers so it is important to take time to socialise the Rhodesian Ridgeback well. It the dog is introduced to other family pets such as cats at a young age it tends to relate to them well. Because of the large size of the breed it can be difficult to control if it tries to establish itself as the pack leader, so strong and thorough training right from a puppy is important to keep the Rhodesian Ridgeback under control.

This is a hardy breed and has few health problems, although they are susceptible to cysts, dermoid sinus and hip dysplasia. The breed is also susceptible to mast cell tumours.

Rhodesian Ridgebacks are able to withstand dramatic temperature changes, which means that they can live outside if desired. Although the breed can live indoors it is relatively inactive when in a house or apartment and prefers a large yard to run around in.

The Rhodesian Ridgeback has a lot of stamina and needs long daily walks or runs. The breed prefers to run off the lead as much as possible. It is important to make sure that the breed is well entertained and exercised, otherwise they can become destructive and display a number of behavioural problems when they become bored. The breed has a smooth, shorthaired coat that is easy to groom with a firm bristled brush. Shampooing and washing should be kept to a minimum.