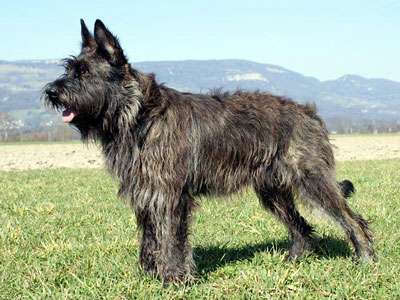 The Berger Picard, also known as the Picardy Shepherd, is one of the oldest and most popular French herding dog breeds. This medium-sized, muscular dog weighs about 50 to 70 pounds and can grow to a height of about 20 to 27 inches. Its high-set ears are naturally erect and quite wide at the base. Its surprisingly thick eyebrows do not shield the beautiful dark eyes. The tail reaches to the hock and curves upwards slightly toward the tip. The thick, waterproof coat is crisp to the touch and comes in a range of colours such as grey red, grey with black highlights, and brindle with a range of shade variations.

Believed to be the oldest of the French sheepdogs, the Berger Picard was brought to Pas de Calais and Picardy, France, by the Franks in the 19th century. It derives its name from the Picardy region in north-eastern France. Some dog experts insist that the breed is related to the Beauceron and Briad while others believe that it shares a common origin with the Belgian Shepherd and the Dutch Shepherd.

After the First World War and the Second World War, this breed's population reduced at an alarming rate, explaining why it is still rare up to date. In Germany, there are approximately 300 dogs of this breed while in France, they are approximately 3,000. This dog was officially recognised by the American Kennel Club (AKC) in the year 1994.

Intelligence, alertness, willfulness, and stubbornness are some of this dog's unique personalities. It is also loyal to its owner and loves hanging around members of the family. It is weary of strangers and barks a lot when excited.

Due to lack of over breeding, the Berger Picard is generally healthy and is capable of living up to a maximum of 15 years. However, it can still be attacked by hip dysplasia and patellar luxation. It should also be checked for hereditary eye problems such as retina dysplasia (RD) and progressive retina atrophy (PRA).

To bring up a Picard and prepare it well for its future life, you have to train and socialise it in the best way possible. Unlike other types of dogs, this dog is not easy to train. If it realises that you are weak minded and not displaying a natural authority, it becomes stubborn and loses interest in learning anything from you. It is also sensitive to the voice, so being unnecessarily harsh and loud cannot take you anywhere with it.

While training this dog, you need to be patient, confident, but firm and consistent. You have to make your rules clear and stick to them. Also, give the dog the best possible start in the society by socialising it with children, strangers, and other dogs. If raised with other pets such as rabbits, geese, and cats, it lives well with them without any problem.

Another important thing that this dog needs is exercise. It loves long daily walks and jogging. You can also engage it in dog biking and sports such as tennis, swimming, Frisbee, football, and herding events.

Despite being suited for living outdoors, the Berger Picard does surprisingly well indoors so long as it gets enough space to roam around. It also requires a lot of attention and does not like to be left alone for long.

The Berger Picard requires little maintenance. Its waterproof coat should only be brushed or combed once or twice a month. It is not advisable to bathe the dog as this might interfere with the coat texture.