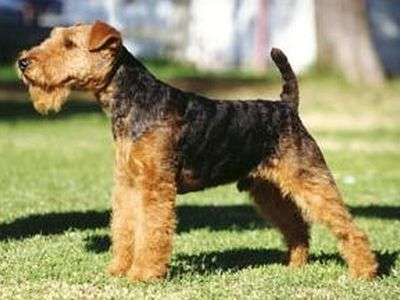 The Lakeland Terrier’s history began in the early 19th century when it was developed by crossing the Old English Wirehaired Terrier with the Bedlington Terrier. Some of its ancestors like the Old English Black and Tan Terrier are now extinct. The Lakeland Terrier is known to be one of the oldest original Terrier breeds still existing today. It was originally named the Patterdale Terrier, although today this name stands for a completely different breed. Its modern name comes from the Lake District in the county Cumberland, which is situated in the far north of England, near the Scottish border. In this rough climate and harsh environment it was first developed to hunt and kill rats and other vermin as well as a variety of wild animals such as badgers or foxes that posed a threat to the crops and livestock. Especially against the Westmoreland fox, an aggressive type that was responsible for decimating the sheep herds in early spring during the lambing season, the Lakeland Terrier was successfully used. With these jobs and its outstanding talents as a guard dog the Lakeland Terrier was mainly kept by the local farmers, although miners and other workers used them for different sporting activities such as rabbiting, bagder digging and fox hunting as well. With the foundation of the Lakeland Terrier Association in 1921, these dogs were first registered as a breed and shown in major exhibitions. This led to international recognition and made the Lakeland Terrier a very popular companion dog that is still used for hunting today.

As a small, square-shaped dog, the Lakeland Terrier is of a well-proportioned build with a rectangular head, V-shaped ears and a strong mussle. The oval, dark hazel, brown or black eyes are small and sit deeply in the skull. The Lakeland Terrier reaches a shoulder height of up to 37 centimetres and can weigh up to about 7,5 kilos, the males being slightly bigger and heavier than the females. The double coat consits of an outer layer, which is wire-haired and hard, and a softer layer underneath. The fur ist normally cut by leaving it longer on the mussle and on the legs. It can appear in different colours varying from wheaten, liver, black or blue with markings along the back, on the neck and the tail. Often the puppies are born with a black fur that changes colour in the first year of their life.

As a typical Terrier the Lakeland is fearless, confident, very alert and lively. It is very suitable as a family dog as it loves children and shows a playful and energetic character. It can be quite stubborn due to its independent nature which means it needs to be trained by a consistent and firm hand. Training prevents it from developing aggressive tendencies and should be easy as this very intelligent dog is a fast learner. If kept with other pets it needs to be socialized from an early age, so it doesn’t chase them around the house constantly. As a talented guard dog, the Lakeland Terrier is suspicious of strangers and tends to protect its territory and family passionately.

The Lakeland Terrier can be kept in a house or city apartment. It needs regular longs walks in the open countryside, but is otherwise happy to be active and entertained inside. It does however enjoy various activities like agility or catching games. It tends to be a loud barker, which can be an annoyance to next door neighbours. Its strong urge for digging, which comes from its long history as a fox and badger hunter, needs to be considered when being kept in a house with a garden. A secure fence is needed to prevent it from escaping. The fur needs special attention as old hair should be plucked by hand three or four times a year.