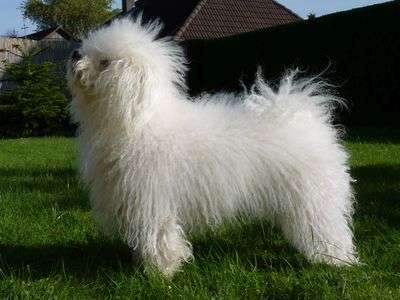 Its origin is in Italy, especially the Balearic Islands. Its domestic is principally in Bologna. Thus he got its name from. It is a nobel dog race, which is very related to races like Maltese, Bichon Frise, Havanese, Coton de Tulear and the Petit chien lion.
In the past this dog often was a present for the Royals. For example Catherine the Great got a Bolognese for present. The Royals said, that a Bolognese is a present, which you can make even to emperors.
Bichon means lap dog, in French "bichomer" means to coddle somebody or something.
This dog race is prevalented especially in Italy and France.

The Bolognese is a small, compact companion dog. It can reach a size from 25 to 30 cm and can weigh between 2,5 and 4 kg.
Its moves are very elegant, free and full of energy. The head of this dog race is small and appeals gallant and stately. The Bolognese just knows, how to behave properly. Its muzzle is quadratic.The lenght of its hulk corresponds to its height at withers. Its tail is curved, but does not touch the dog's back.
The most specific detail on this dog race is its long fur, which is white as snow. It is soft, curly and fluffy. Some breeders and experts also call this race "Little snow flake". Because of its fur, the master of this dog has to care a lot about this.
Also very specific are the Bolognese's eyes, which are almost black and big.
Its dropping ears are quite long and have a lot of curly hair.
Its expactancy of life is about 10 to 15 years. But in average it adds up to 12 years.

The bolognese knows, how to behave. It is a very civilized dog. Experts think, that because of their past this is genetical.
This dog race is perfect for beginners, because it is easy to educate. It is also a perfect family dog, because this race loves children and other animals. It copes with almost everybody and everything.
The Bolognese does not need big walkaways. Because of this it is a perfect dog for flats and small houses. It has a minor compulsion to move. Therefor it is a popular dog for cities.
But who thinks, that the Bolognese is a boring dog, who just wants to sleep, is wrong. The Bolognese is a quite temperamental and brisky dog. It is very active, but not hyperactive. It is just a happy dog.
It's fond of children and a perfect family dog. It is a very faithful dog to his family and is very devoted.
You will be well served by this dog race, if you want to have a intelligent and attentive small dog. You can teach this dog a lot in short time.
Also it is a vigilant dog, which never is aggressive.

The Bolognese is a perfect dog for Showings. There are even special showings just for this dog race.
To take part in such a show, the Bolognese has to have perfect groomed fur and its eyes have to be tearless. This is a big point on Bichons, because they have problems with their tear ducts.
It is also important, that there are no tangles in their hair.