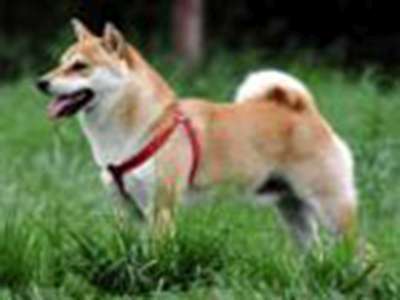 Originating in Japan, the first known instance of the Shiba reaching foreign shores was when a family brought one of the dogs to the United States. In the 70s, the first litter of Shibas to be recorded was born.

The breed is small, but with a strong, muscular frame. Typically, males come in at 35 - 43 cm in height at their withers. Females are a little shorter, at 33 - 41 cm. In terms of show dogs, a mid-range size is preferable for each gender. Weight on average is around 22 pounds for a male, and 18 pounds for a female.

The Shiba sports a double coat, with the outer consisting of straight, stiff hair, and the undercoat being thicker, softer fur. The hair on the tail is longer than the rest of the body, and the tail arches over the small of the dog's back.

Traditionally, Shibas are black, red or tan, or a combination of the colours. They can also be sesame, a red colour, where the tips of the hair are black. They have what's known in Japanese as "urajiro", which translates into "underside white". This means their chest is a white colour, though it can also be grey. Though the Shiba is sometimes also bred in white, this is inappropriate for show dogs, as it is considered a fault, due to the lack of any "urajiro" markings.

Shibas can often show aggression, a trait that can be brought on by their strong hunter instinct. For this reason, they are often not the first choice for family pets in a home with children, though socialisation and training, as well as having the puppy from a young age, can all help to change this.

The breed is indeed a very beautiful one and does pride itself on its appearance. They'll often clean themselves extensively and go to great lengths to keep themselves clean. This trait is actually beneficial to the owners, as it makes the dogs easier to housebreak; in fact, they will often train themselves in this manner. This trait also means that their grooming needs are very minimal, as they will maintain their own coat.

The Shiba is a highly intelligent dog, but is also very independent. It can often be difficult for a master to have his or her dog do what they are expected to do, which can make training more difficult, particularly if it is not started from an early age.

The Shiba can live to a lengthy 12 to 15 years, and regular exercise will help to increase the life expectancy of the dog; the oldest Shiba passed away at he age of 26.

In terms of health conditions, though the breed is a relatively healthy one, they are known to be affected by glaucoma and cataracts, and allergies. As is common with many agile and active breeds, they can also suffer from hip dysplasia.