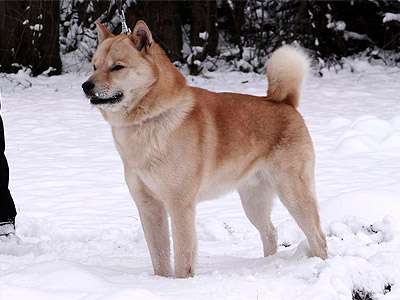 The Hokkaido is a very handsome, well-dressed dog with the confident bearing that usually accompanies such good fortune. Its thick fur coat is long and luxurious and is generally red or white, but it does occasionally wear black, brindle, fawn and sesame. Together with this, a strong physique allows this breed to withstand extreme temperatures and heavy snowfalls, which, for centuries, was much appreciated by the Ainu people of Hokkaido when out salmon fishing or bear hunting with this helpful and trusted companion.

The broad head, pointed muzzle, sharply pointed ears and small, dark-brown eyes give the Hokkaido a rather intimidating look that seems to raise its stature to well above the 20 inches that, in reality, it generally is. Its weight is made up of 65 pounds of, mostly, muscle, which makes this a medium sized canine that will happily spar with a wolf. It has, in fact, stolen that animal’s fearsome howl and will use it whenever it recognises its owner, or feels that it has impressed them in some way. The upturned, bushy tail will then also be used to signal the same.

Together with its ability to withstand freezing conditions, the Hokkaido has a natural affinity with the untamed regions of the wild and possesses the power and resolve to survive in them. It is an incredibly alert and courageous breed with the suspicious nature that makes for a formidable guard dog and protector, which is why the Ainu people of Japan chose it as travelling companion when out hunting. The truly impressive feature of the Hokkaido’s temperament and mental faculties is its built-in compass and radar, which would have been invaluable if its owner had become lost in a snowstorm.

No matter how many days travelling distance it is away from home, the Hokkaido has the innate sense of direction to find its way back alone. The breed seems to run on a never-ending supply of energy and its high level of activity makes it unsuitable for apartment living, or for being in families with small children. If older children are taught how to display their leadership skills, the Hokkaido can become their fierce defender, but without these the dog will respond with obstinacy and a measure of disrespectful aggression. It is also not fond of sharing its space with other animals, although it has in the past been successfully trained as a member of a team of sled dogs. However, properly socialised and obedience trained, the Hokkaido can become a loyal and loving member of a family.

The Hokkaido is a highly intelligent, confident and dominant breed of dog that can, however, be quite easily trained by someone with a strong personality of their own. Dominance must be established by a very firm, but rewarding method that will not be seen as threatening by a fearless dog that, as a middle-weight, will not hesitate to get into the ring with a bear from the super heavy-weight division. Early socialisation is a must and puppy kindergarten is highly recommended to teach this breed right from wrong. It is particularly important if the dog is to behave well around children.

The Hokkaido should never be allowed to become bored through inactivity. Owners need to commit to walking this dog long and often, and to play some active, energy-sapping games if the dog is not to become obstinate or destructive. All of that energy must have an outlet, but if kept happy, this dog’s owner will often be greeted by the howl of a wolf.