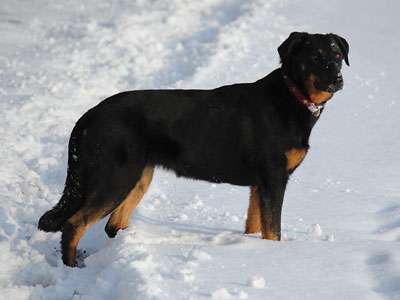 A cousin of the Briard, the Berger de Beauce may also be an ancestor of the Doberman. The name "Berger de Beauce" first appears in 1809 to distinguish this short haired dog from the long haired type, called "Berger de Brie" or "Briard". The Beauceron was greatly valued by the military during the two World wars, and it became popular in the countries neighbouring France, as well as the USA.

The Berger de Beauce is very protective of its home and can be a formidable guard dog. Their vigilance and bravery also makes them superb rescue and police dogs. They have a patient, easy going temperament, which enables them to adapt well to family life. They are generally very good with children, and affable with other dogs, but at times they can seem intimidating, and prospective owners should take into account that Beaucerons are foremost working dogs that require lots of exercise. They are therefore not suited to the confines of life in small homes.

The coat is short (3-4cm long), thick and close to the body. The buttocks and tail are lightly fringed. The undercoat is fine, short, dense and grey, and cannot be seen through the top coat. The coat colour is black with tan markings, in particular on the legs, hence the nickname of the breed "Bas Rouge", meaning "Red Stockings". The coat may also be a three colour merle-speckle: black, grey and the necessary tan markings. This coat is known as "Harlequin" (danoisée in French), even though it is different from that of the Harlequin Great Dane. In the US this coat is known as "merle".

The eyes are horizontal and slightly oval. The iris should be dark brown, even if the tan is light hazel. The ears are normally cropped, but natural ears are semi-erect. In addition to the four regular toes, there are two dew claws on both hind legs. Beaucerons that lack this characteristic are not eligible for competition.

Gentle, consistent training is paramount with the Berger de Beauce, which will be rewarded with a very loyal and disciplined dog. They are compliant with owners who are assured and in control, however, incorrect training or abuse can result in abnormal, disturbed behaviour, making the Berger de Beauce more suitable for experienced dog owners.