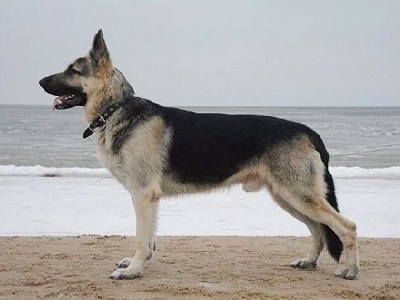 The East European Shepherd is a breed of dogs also called Vostochnoevropejskaya Ovcharka or Owczarek Wschodnioeuropejski, which originated by crossing German Shepherd dogs with Russian Laikas in the ‘30s to obtain hardy dogs resilient to extreme weather conditions. Initially bred for military use, the practice carried on as owners realised how intelligent the breed is. Most Eastern European Shepherds bear the blood of both ancestors, and some lines originate from German Shepherd dogs taken during the Russian invasion in World War II.
The first standard for the East European Shepherd was approved in 1964 in Russia’s then Cynological Council.

East-European Shepherd dogs are very agile, sympathetic and loyal towards their owners. They have a well-balanced personality, they are confident, highly intelligent, with a playful disposition. But they are also tough dogs, weary of strangers and very protective of their masters. They make wonderful guard dogs and they can be equally friendly or aggressive on command.
Though mild-mannered and social, these dogs may not be an ideal family pet because they recognize only one master and can at times misinterpret other people’s playfulness with threats against their master. They will protect their master at all costs, and they will not hesitate to attack any living creature if the master demands it. It is this resoluteness that has made this breed a brilliant asset to police forces and armies in Russia. When training an East-European Shepherd, the main objective is to be acknowledged as the leader of his pack. Bringing a dog of this size and temperament in the household can only be a wise move if he is made to understand his position in the family hierarchy from the very beginning. They are not recommended for households with other pets.
They prefer having one companion alone, and they need their owner to exercise them regularly. They are extremely quick to learn and very obedient. It is in their nature to appreciate tasks and tests, and they will obey their master to the best of their ability, living outside and coping with extreme climates without complaint. They will thrive in an apartment, as well, provided they have a consistent exercise routine.Their sheer size and obedience makes them excellent draught and hunting dogs, especially when in packs. Their exercise regime should consist of various daily walks or sprints, where they heel beside or behind the master, never in front, because their instincts tell them the leader comes first.

East-European Shepherds are large dogs, larger even than German Shepherds. Sexual dimorphism is evident, with males measuring 26 to 30 inches at the withers and females no shorter than 26 inches. Both sexes weigh anywhere between 70 and 130 pounds. They have strong bones and robust muscles. Their coat is dense but medium in length, and the undercoat is thick, developed for running in cold weather. The accepted colours of the breed include saddled, black-and-tan, black-and-red, blanket-back tan and black, solid silver, or solid black. Some rare colors include: blue, silver and white. Agouti grey and red are not desirable colours, but allowed in breeding.
The head is proportional to the rest of the body and the dog has a well-rounded allure. The forehead is massive and slightly rounded, the muzzle is the length of the skull, the lower jaw is strong, the nose is black and large, and the lips are pigmented and tight. The teeth are quite large, set in full complex, the eyes are dark and with close-fitting eyelids. The ears are set high and pricked.

While this is a low-maintenance breed, some care, such as nail clipping and ear cleaning, should be provided regularly. Occasional brushing would benefit the dog tremendously, but bathing should be carried out as seldom as possible, because the dog needs the natural oils embedded in his skin. It replaces its undercoat when the seasons change and there’s a good deal of shedding throughout the year.
A litter will yield four to ten puppies and an East-European Shepherd dog will live up to 10-12 years with adequate care and exercise. Some of the health conditions cited for the breed are: hip dysplasia, degenerative disc disease, ectropion and entropion.